“The Wall” is dividing America. Our evolutionary heritage is partly to blame. 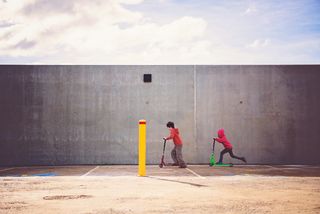 If you are old enough, when you think of “The Wall,” Pink Floyd’s album and movie of the same name might come to mind. Both of those are more pleasant that our current division in America about our Wall (or lack thereof). We are entering the fourth week of a government shutdown, the longest in history, with no end in sight. The contiguous, physical wall that President Trump wants along our southern border with Mexico is  symbolic of our division in America.

According to PRRI research from the American Values Survey, among Americans, about 58% are opposed to the building of a contiguous wall along our southern border with Mexico, and 41% are in favor of it. However, the proposed wall is a deeply partisan issue with 80% of Republicans in favor of it (with 45% being strongly in favor of it) and 80% of Democrats opposed to it (with 61% strongly opposed to it).

Our Evolutionary Heritage Is Partly to Blame

There are many reasons for our growing political divide, but one underlying reason has to do with our evolutionary heritage. Our political divide, along with other societal problems including obesity, racial inequalities, global climate change, and pollution, have their roots in what evolutionary biologists have coined evolutionary mismatch. Our evolutionary history over about two million years was spent mostly in nomadic tribes of hunter-gatherers. Thus, through natural selection, our brains and bodies adapted to survive and thrive in relatively small tribes of about 100-150 members who roamed about a more natural environment.

Geopolitics, taxation levels, saving for retirement, international trade agreements, and weighing local vs. municipal vs. state vs. federal government interests make absolutely no sense from an evolutionary standpoint. Our brains did not evolve to weigh the pros and cons of such concerns effectively. Throughout most of our evolutionary history, we were just trying to make it through the day. We needed to find food, build shelters, ward of threats, make babies, and protect those babies. That’s about it!

My Tribe vs. Your Tribe

From an evolutionary standpoint, the survival of me, my family, and my tribe mattered much more than the survival of you and your tribe. Certainly, there was infighting among tribe members. But if killings occurred too frequently among members, well, that’s a tribe would self-destruct and cease to exist.

This tribalism plays out in our society in many ways. For example, in our sports teams (Liverpool vs. Manchester United in soccer, Ohio State vs. Michigan in college football, New York Yankees vs. Boston Red Sox in baseball), religion (Catholics vs. Protestants, Christians vs. Muslims), countries (e.g., France vs. England), and politics (Republicans vs. Democrats). Despite the fact that we are all part of the human race, it is very easy for us to fall into tribalism (i.e., an “us” vs. “them” mentality) because it is rooted in our evolutionary heritage.

The Absurdity of Our Tribalism

There is a certain level of absurdity to our tribalism when we think more deeply about it. When it comes down to it, we are much more similar than we are different. Most of our differences, such as what language we speak the color of our skin, whether we are male or female, what foods we like, and even how and to whom we pray, were determined by factors beyond our control. After all, none of us had any influence over when and where we were born, who our parents were, the color of our skin, and the era of our existence. Somehow, each of our consciousnesses are in their own particular bodies at a certain place and time, and we have had no control over this.

Many comedians and authors have rightfully poked fun at our tribalism. In Gulliver’s Travels, Jonathan Swift satirized the ongoing conflict between Catholics and Protestants through his story of the warring factions of Lilliputians who argued over which end to break their boiled eggs. Dr. Seuss, in his witty and charming way, taught valuable lessons about racismthrough the Star-Bellied Sneetches who were condescending toward the Sneetches who had “no stars upon thars.” Jerry Seinfeld noted how, when it comes down to cheering for our sports teams, we are basically rooting for laundry.

The Slippery Slope of Tribal Pride

It feels good to be part of a tribe because it gives us a sense of affiliation and bonding with other in-group members. Throughout our evolutionary heritage, strong social bonds with one another enhanced our chances of survival. The good feelings that come from bonding socially motivate us to seek such affiliation and bonding.

In one sense, it can be okay to take some pride in this affiliation (e.g., “I’m proud to be an American,” “I love my university”). However, it’s easy to slip into tribal, us vs. them mentality when we start saying versions of “me and my group are better than you and your group.” Arguably, this is how patriotism (e.g., “I love my country”) can turn into a more tribal nationalism(e.g., “my country is the best/greatest”). A look back through history (e.g., Nazi concentration camps, genocides, slavery, ethnic cleansing) offers hard lessons about what can happen when hyper-tribalism runs amok.

Despite our increased access to information, or maybe because of it, America is growing more politically divided. Elements of both right and left are becoming more polarized. That is, the right becomes “more right” and the left becomes “more left.” In essence, at least the most vocal groups of us are becoming more deeply entrenched within our respective tribes. Websites and social media platforms, through algorithms, create filter bubbles that feed us information that they know will resonate with us. Through a confirmation bias, we seek information and people who reinforce what we already believe. The Internet makes this too all too easy.

Back to the Wall

The building of a contiguous wall between the southern border of the U.S. and Mexico, in a sense, is an attempt to create a firm, physical separation between the U.S. “tribe” and outside “tribes.” The arguments about just how to keep these tribes divided is both a reflection of and contributing to the tribalism between Democrats and Republicans. In this sense, “partisanship” is just another version of tribalism. What we see with the wall debate and the government shutdown is our evolutionary heritage trying to play itself out in a world very different from our hunter-gatherer tribal ancestry. Yet, we did not evolve to figure out such complicated problems on this grand scale. This is evolutionary mismatch in action.

There’s no easy solution to a divided America. However, understanding the roots of our divisions is a step. Evolutionary mismatch is one reason we have some of the problems we are experiencing. Tribalism, played out on this large scale, is one such problem. Aspects of tribalism can help us bond with one another, but it can easily take a nasty turn into “us” vs. “them.”

In The Art of Happiness, His Holiness the Dalai Lama, offers some profound wisdom regarding connecting with others that can help us unshackle from some of our tribalism. Instead of viewing others as how they are different from us, we should look at how we are the same. A starting point is that we all want to be happy, in the deep-rooted sense of the word, and to avoid suffering. No matter what a person’s political position, we all share the same emotions as well. We all have hopes, fears, and dreams. We want to be liked and accepted by others, and we have all felt the painful sting of rejection and the hurt of loss. We are all imperfect, yet doing the best we can in this moment.

We are all in this mess together and are suffering for it. We want it to be better than it is now. We know we need to work together to make this happen. We all know that a house divided cannot stand, and that we have to learn to compromise for the greater good. It’s time that we roll up our collective sleeves and sit down at the table together. That’s the only way around the walls that divide us.